How to Get Backyard Chickens Legalized In Your City 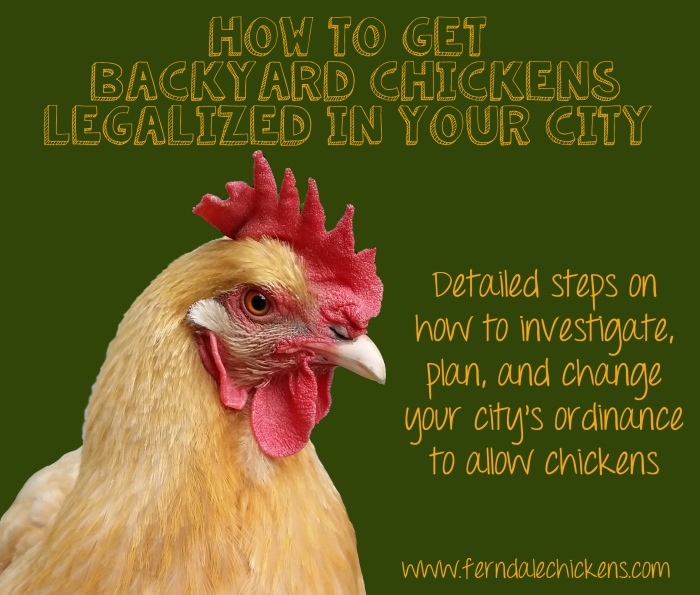 The most common question I get is “how do I get the ordinance changed to allow chickens in my city?”

Unfortunately, there’s no simple answer. Your best bet is to review the current ordinance, question city council & code enforcement to see what their stance is, and then address questions until everyone understands you’re not asking to open a branch of Tyson chicken farms in your backyard. Here are the steps I recommend taking, in order:

So many people are addressing this issue within their city, and some of them are putting their presentations online. I’ve compiled some below to help you get a feel for what topics you should expect to address and what seems to be working for others:

One Year Review of Chapter 107 (Animals) Regarding Backyard Chickens – Ann Arbor, MI (evidence of any complaints filed during the first year backyard chickens were allowed in Ann Arbor- only one complaint filed against someone with illegal chickens, and one dog attack on legal chickens)

Slideshow Presentation made by a renter requesting permission to raise chickens in Cleveland OH:

No, seriously. I've been reading everything I can about chickens for 4 years- let's put my knowledge to use. Let me know your concerns and questions, and I'll address them in this blog and send you a personal email! email: lmikulski@gmail.com Google+